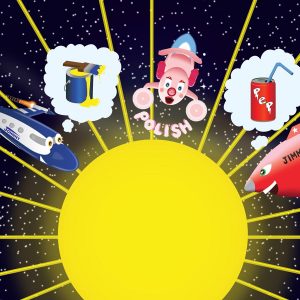 So I had the inspiration for my children’s story Pep, Polish and Paint – all I now had to do was write it! So I sat down and wrote the first draft without too much thinking. In that first draft I just called the three spaceships spaceship 1, spaceship 2 and spaceship 3. But after sending it off to be critiqued, it was suggested that it would be better if the spaceships had names.

So now came the problem – what names should I choose? Again, I didn’t give it much thought. I just used the first three names that came to me which were Jimmy, Johnny and James, but following advice I received from a bestselling children’s author in the USA, I changed James to Jenny so that not all the characters would be male and the story would appeal to a wider audience. That also fitted in well with how the illustrations of the spaceships were shaping up at the time, as one of them definitely had a more female ‘air’ to it than the others. I did ask some of my friends and fellow authors for their thoughts on the spaceship names and received some interesting suggestions, but in the end I kept with Jimmy, Jenny and Johnny as they were simple, easily recognisable and I liked their alliteration and rhythm.